The woman who came over and talked to me with a mixture of Japanese and some English while I was volunteering, is May. She has three children and four grandchildren. She came to America because she didn’t like the person her parents wanted her to marry, so she came here to follow the person she had a one-sided love for.

May was born in Saipan ten days before the war broke out, on November 28th, 1941. In those days, the Japanese worked in the sugar industry in Saipan. There were sugar cane fields and factories for sugar manufacturing. May’s father ran a wholesale clothing store geared toward the Japanese. He was a Chinese merchant oversea. That’s why it was not a problem in those days to go to other countries.

When the war began, the family evacuated to Yamanashi, Japan. May was the third out of seven siblings so there were much younger babies as well. They have no recollection of those times. After the war, her father opened up a large Chinese restaurant that had six floors and a banquet hall that seated a 1,000 called “Yohkaroh” in Chinatown in Yokohama. May grew up there as the daughter from a good family during her youth.

When she came to America and waited to receive her Green Card, she became a student and worked as a waitress for a while. Right now, we are passing through Beverly Hills. It is like a giant Ginza or Omotesando with palm trees growing. 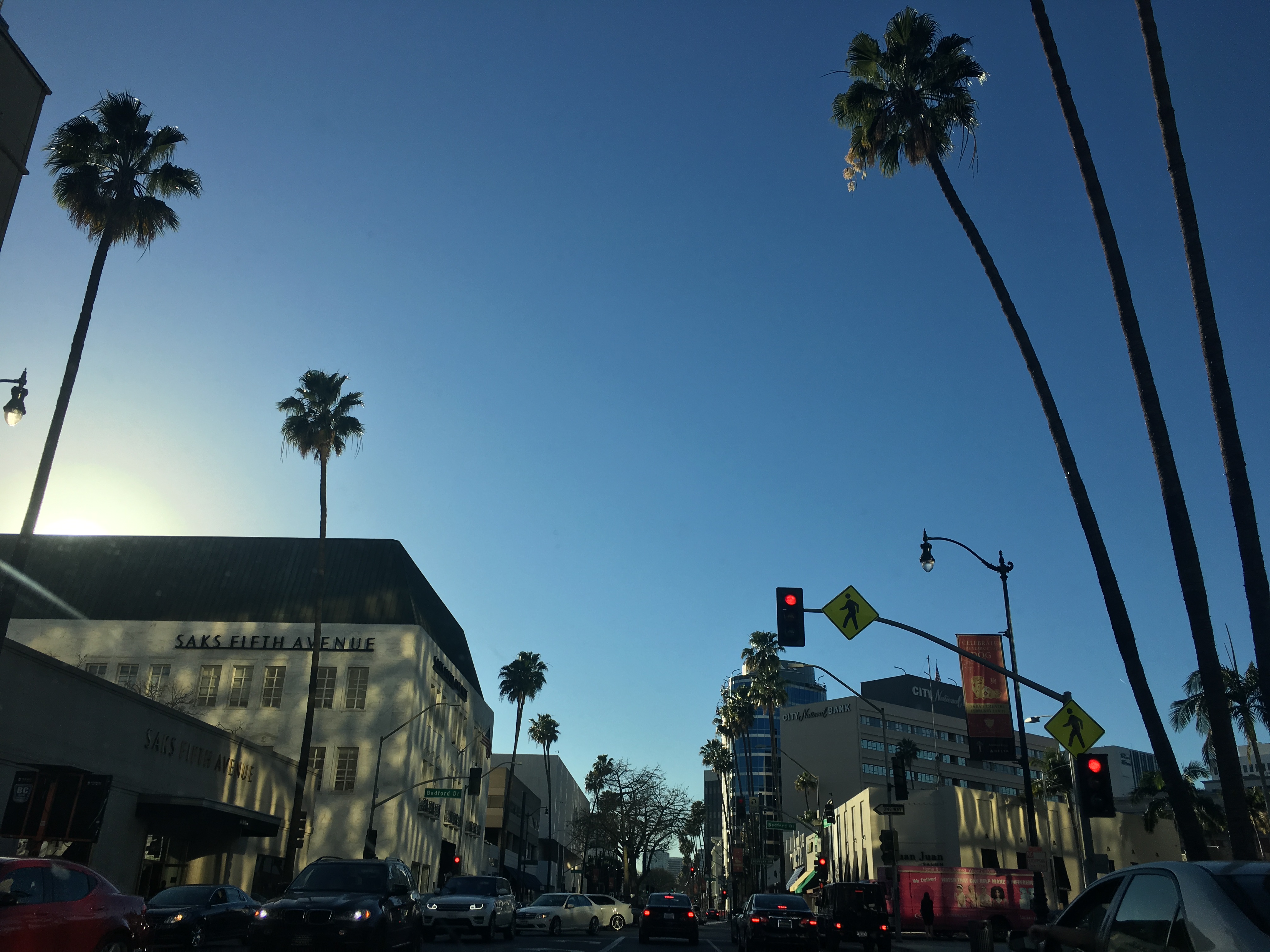 As we drive past the area of jewelry stores and Members-only country clubs, there is a street lined with fancy restaurants. On the left side is the famous Japanese restaurant, Benihana. In May’s younger days, she worked there wearing a kimono. She was familiar with the restaurant business, so they counted on her. She remembers well when Ken Takakura and Kyu Sakamoto came to eat there, even though she forgets things that happened recently. She forgets what she just did or what she had just heard. She especially has a hard time remembering people’s names and it saddens her. But her daughter told, “When you are in an elevator with someone, ask them “How are you? By the way, what was your name?” Then that person will realize that “this person is forgetful.” After that, even if she forgets, she stopped being sad.

It turns out that her husband was not the one-sided love that she followed to America. At a party for Japanese government VIPs, May was asked to waitress, and there she met her future husband, who was the chef at the Japanese Consulate. They eventually got married. They had their three children at the hospital that we had taken Toshiko Muto to. Her first child would not come out easily, and May ended up having to walk around the hospital for 10 hours. Her husband passed away awhile back. She gave her house to her children and is now living in “Tokyo Tower” for elderly residents. A little while ago when we were in the elevator, May told another resident who was in there, “I just moved in. Since I have always lived with others, it is lonely.” The other resident replied, “Everyone feels like that. But once you get used to it, you’ll feel better.”

We are now heading for the beach by car, but the street is still one straight line, as May goes on and on to describe in detail about this delicious restaurant, or that beauty salon that celebrities frequent, or that sexy lingerie store. The range of her knowledge is broad, and when I asked her why she knows so much, she said that before she retired, she managed and taught at a driving school called “Pacific Japan Driving School.” “Pacific” is because she was born in Saipan and “Japan” is because she wanted to attract Japanese customers. When I asked “Did you have a driving course?” she said they don’t have courses here. She would bring a car for teaching and pick up the customer at their home, start by practicing in that neighborhood and work with them until they passed the driving test. You can start this business with one car. I just realized that there is a brake on the floor of my passenger seat and a rear view mirror on this side too. This car was a car for teaching!

The elderly gentlemen that I volunteered with this morning told me “I have an American Dream.” One was the second born son of a farmer, so they were poor and another worked for a large corporation that sent him here on temporary assignment, but the life here agreed with him so he obtained a Green Card and was fired from the company in Japan. There was also a person who came to visit and just stayed on. They all sounded like they had hard times but also had good times as well. They advised me that if I wanted to live here, having qualifications would add one digit to my income. Become a nurse! Schools in the U.S. are expensive, so go somewhere like the Phillipines and get qualified, then come here and switch it over, that is the smart way…according to them. However, being able to support oneself as an artist is difficult here as well. It’s not a surprise but, even here in America, it doesn’t seem that things are always smooth sailing. Now I feel like going to see more artwork by good artists.

The sun has started to set and we have yet to arrive at the beach. I finally said “May, I feel like going back.” May said “It’s just a long sandy beach and it would just be boring” as she made a U-turn. Oh…I should have mentioned it early. Next time I’ll come to the beach by train.

We hit traffic on the way back. 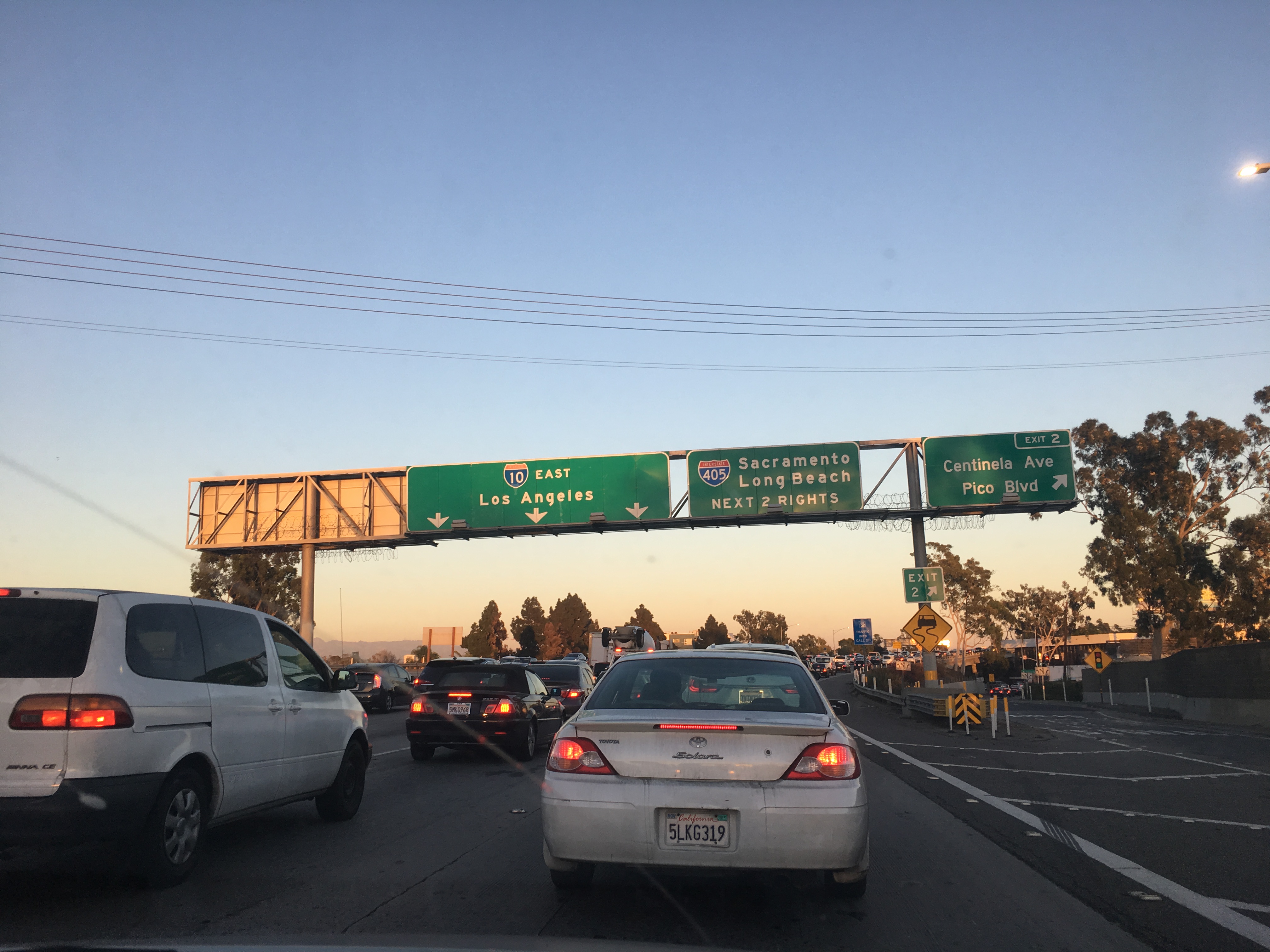 For the next two hours, we had a fun time talking about things such as the Awa Dance that May is learning.
May’s roots are Chinese, but she had always wanted to be a part of the Nikkei community. That’s why she did volunteer work for the elderly for eight years, learned to play the shamisen, ukulele and dance. It must be deeply related to the memories of her late Japanese husband and being raised in Yokohama. She waited four years and was lucky that a vacancy came up, so she moved in. She thinks the former resident passed away. I’ve heard that 70% of the residents in “Tokyo Tower” are not Nikkei. May told me that the Japanese worry about how they are seen and don’t want others to think their families won’t take care of them, so they don’t want this to be their home. I don’t know if that is true or not. When I told May, “I don’t think I’ve met any Koreans yet,” she said, “There are a lot of them. They make up most of the population here. You can’t tell because they speak Japanese. The people who were in Korea when Japan occupied it, were educated in Japanese so they are all fluent in Japanese.” 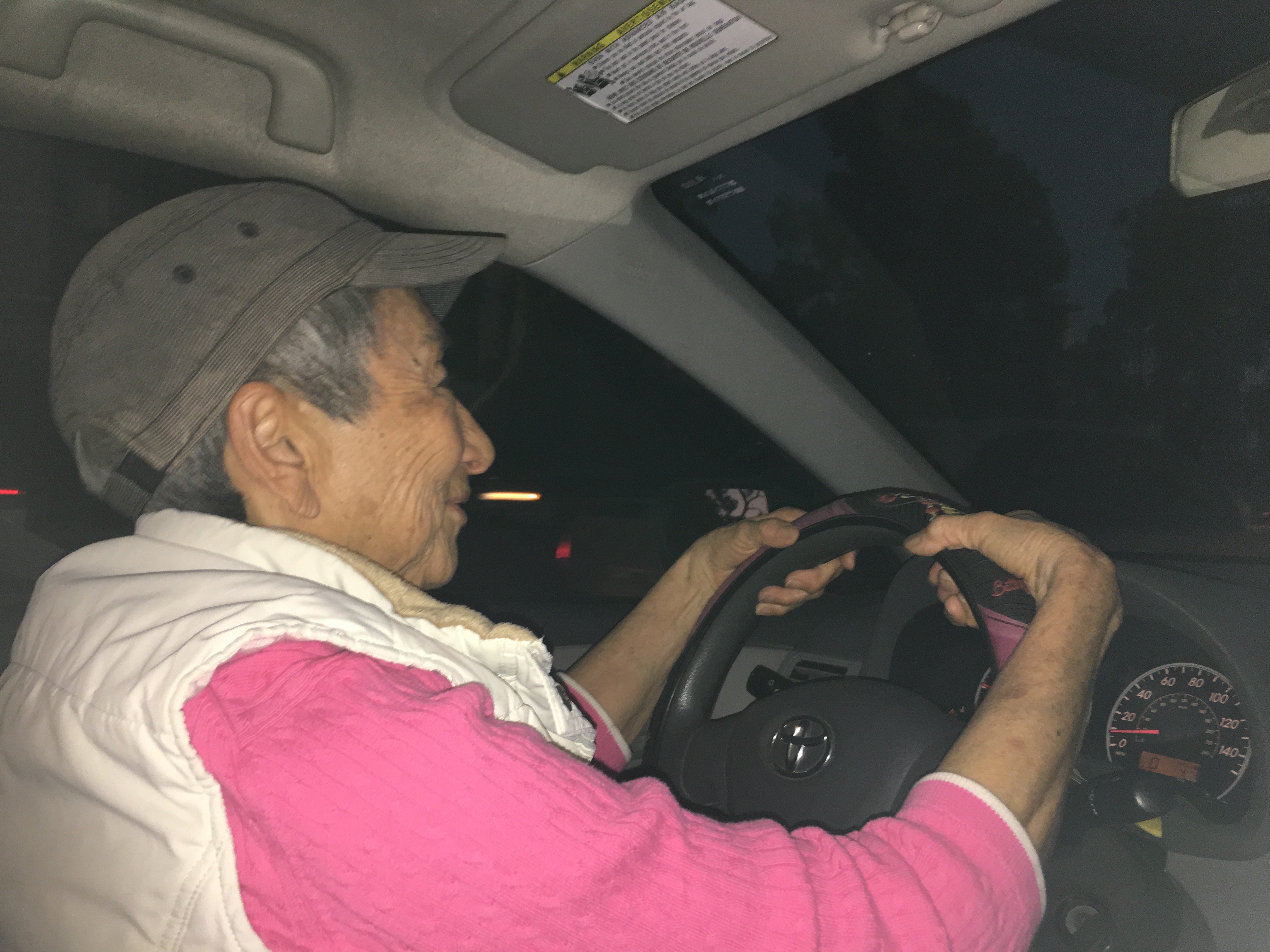 We finally made it close to home. The sun had set and from the 9th St. to 4th St. wholesale district, the homeless were huddled together. When I first arrived in Little Tokyo, Grant had told me not to go beyond 3rd St. because it was dangerous so I haven’t walked around that area. I didn’t want to be rude and look at them, so I looked away, but all of them were Black people. I have no opinion. Just that I felt the American wall.