I’m going on a drive with Grant today! 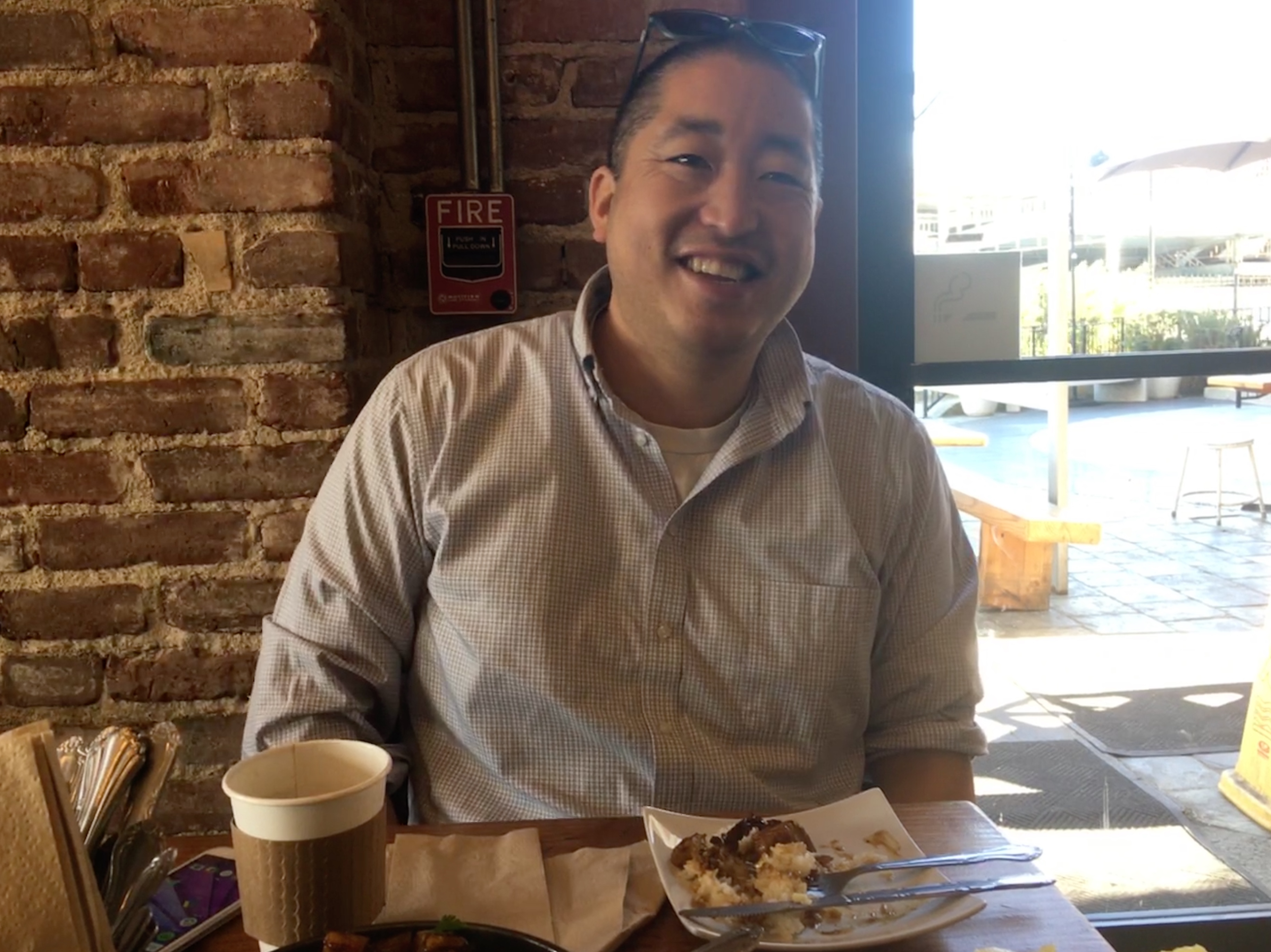 I really appreciate that he has freed up a day out of his very busy schedule. Grant is expecting the birth of his second daughter soon, so today will probably be the first and last day for me to go see the sights with him. If she is born while I am still here, I definitely would like to go and see the baby.

There is something that I talked to Grant about in the car. It was the continuation of my question “What is a community organizer?” His car was parked in a large public parking structure right behind Daimaru Hotel. Grant said that “In the past there were a lot of people who worked for a living here.” I asked “Does that mean that the City of Los Angeles cleared out this area?” He replied that “It is sad but that’s what happened.” When I asked “For what? To alleviate the traffic congestion?” he stopped the car and we talked for a while.

Whenever I take a walk around the Little Tokyo area, what I always look for as a landmark is the Los Angeles City Hall, but in this pretty large area there is a concentration of municipal buildings. The construction of these buildings had just started after the war, at the same time the Japanese, who had been released from the camps were returning. In other words, the city occupied that area in order to put pressure on the area that the Japanese were returning to. That is why the present Little Tokyo is so small.

This Japanese American community has been met by numerous tsunamis. The first wave was the persecution received after the attack on Pearl Harbor and the Nikkei were sent to concentration camps. The second wave came when the war ended and they came home to a new city plan, in which they lost their place of residence and had to break up their families. The third wave was development. Rich developers bought land and constructed new buildings. Rent and cost of living increased and the poor could not afford to live there. Development is like the waves coming in and then retreating over and over. That is the reality that the Little Tokyo community is facing now.

According to Grant, in order for the Japanese to endure the harsh times, there were two words that they used. These words were passed down from the Nisei and are well known Japanese words here. They are “Gaman” (To endure) and “Shikataga nai” (It can’t be helped). But Grant thinks that now the way to solving the problems that the community has, is to take a new form of action. It is not to endure, nor give up, and it is not to fight. I asked if it is “Resistance?” He answered that it is “Creation.” That is why he wants to create places for people to gather, create affordable housing where people can live with a peace of mind, create the structure for social welfare, and create a cultural focal point in this town that has a complex history. His work as a community organizer is to protect and promote the community through “Creation.” And art is one part of that creative plan.

I wanted to go somewhere high up where I could have a panoramic view of Los Angeles. Grant’s friend of 20 years, Lauren also joined us. We talked all through today’s drive. I really had a good time. We are foreigners to each other but share facial features that look like we could be siblings. 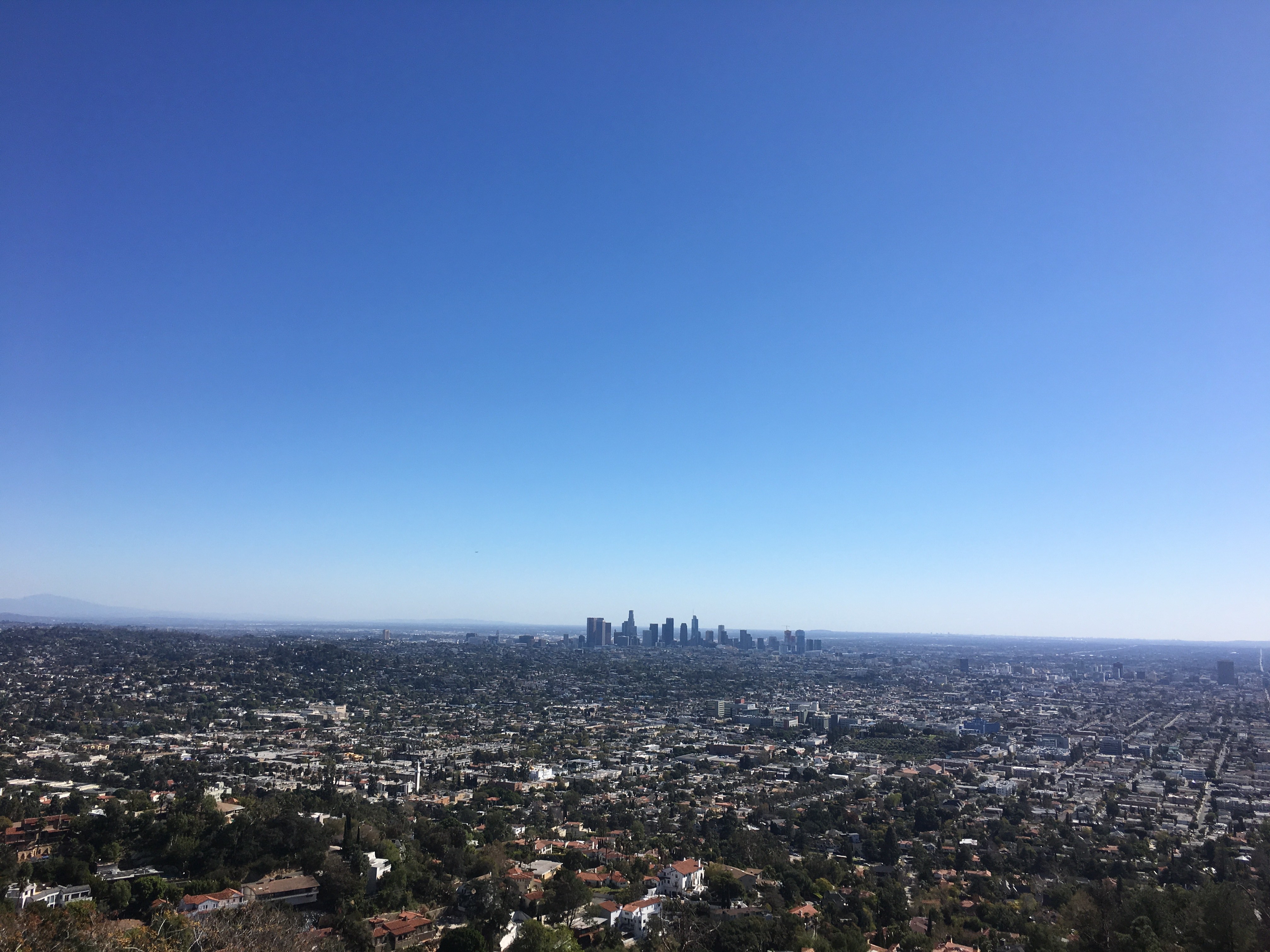 From this viewpoint, I can see half of the scenery clearly, and the other half, not so clearly. When I look through to the town that I live, on the other side of that translucent area, the stereotype that everyone sees of Japan, seems to somewhat be swaying. And from the town on the other side, this side cannot be seen at all. I felt that I wanted to create a “Team.” Together we would explore Little Tokyo and right next to a community that is vastly real, cultivate a narrow street that is fiction. It would be interesting. This community’s past began all of a sudden when the pioneers set foot on this land more than 100 years ago. If the history of the state of this community is to be preserved, I feel that a secret tunnel that connects to Japan’s Edo period… no, further back to the Nara period, or even the Yayoi period, should be created. The future will continue endlessly through the creativity of people. I have found a new purpose for the near future. That is to have international collaboration of creation between Japan and the Nikkei community here in the Little Tokyo where I have been given the chance to meet so many people.