I was having a hard time thinking about how to write about an important part of the Nikkei community, but I decided to just start writing about it.

On February 17th, I attended the “2018 Day of Remembrance” event that Dean invited me to. The theme of the program was “The Civil Liberties Act of 1988: The Victory and the Unfinished Business.” In other words, this was a commemorative ceremony and reception on the occasion of the 30th anniversary of the public admission by the U.S. government of their unfair incarceration of the Japanese during the war that had provided an apology and monetary reparation to the survivors. The program began with a Japanese Taiko drum performance. Among the many people who attended were civil rights activists, people who have devoted themselves to the protection of materials and non-materials of historical information, and also family members of people who had taken part in this part of the Nikkei history. Dean introduced me to many of the people and after that he sat down with me and gave me some background information.
He said, “There are many in the Korean and Korean American who believe that the Japanese government has yet to take a clear stance of apology for the issue of the Comfort Woman with Korea. On the other hand, redress and reparations, which included financial compensation and an apology from the US government, was seen as a “Victory” by Japanese Americans”. 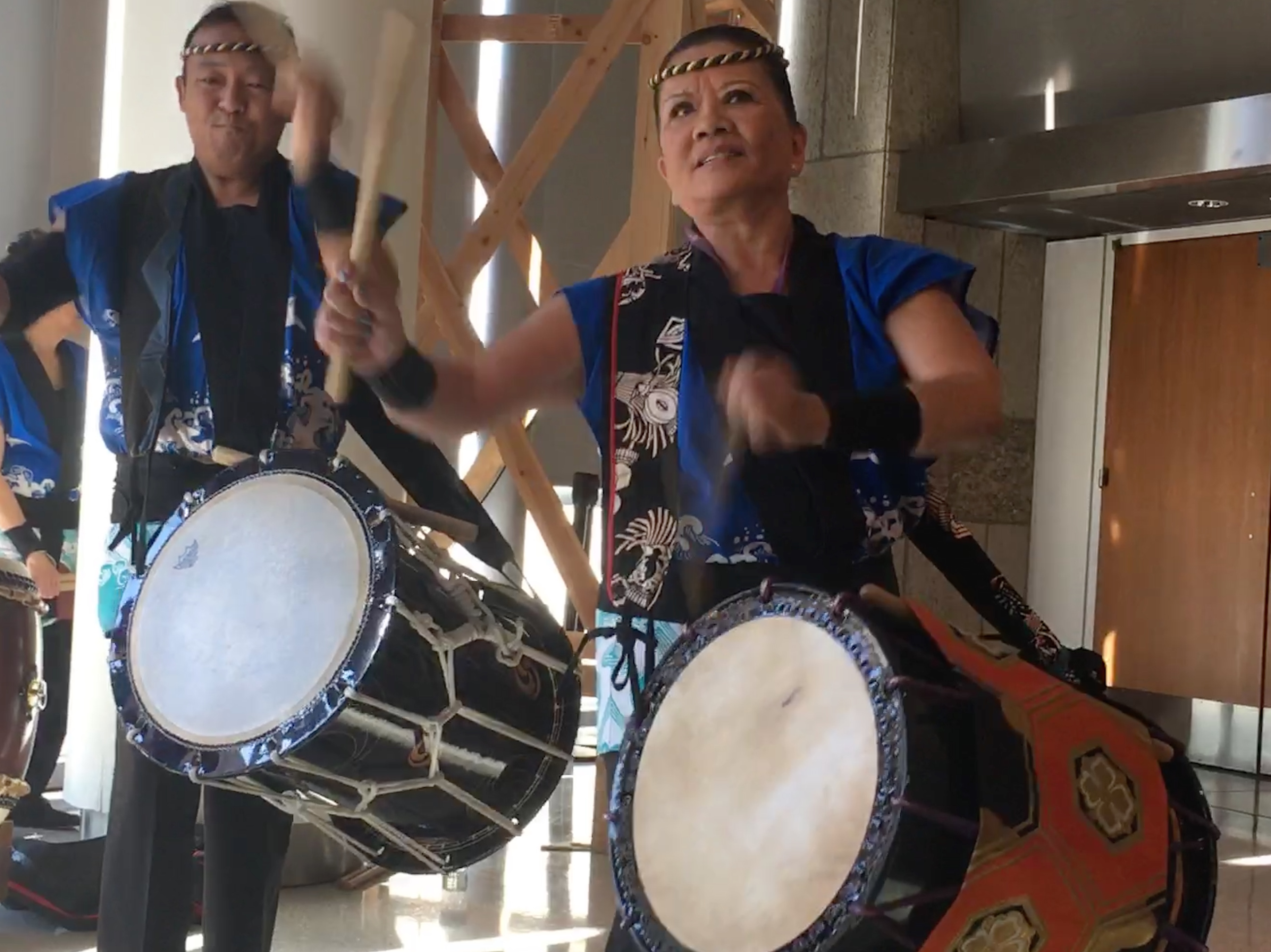 In a speech that was made, a very strong calling of “The Nisei had to Gaman (endure), but the new generations need to overcome that and come together to raise their voices for rights,” was heard and met with applause and cheers by all. Then the youth from the YMCA came in with flags. Those flags had the names of each of the camps that existed all across the United States. As the emcee read out each camp name, people stood up. That was to show that they were, or their parents or grandparents were in that camp. Dean also stood up. Most of the people stood up, though I didn’t. I thought of how my family did not belong to that history of being in camp. 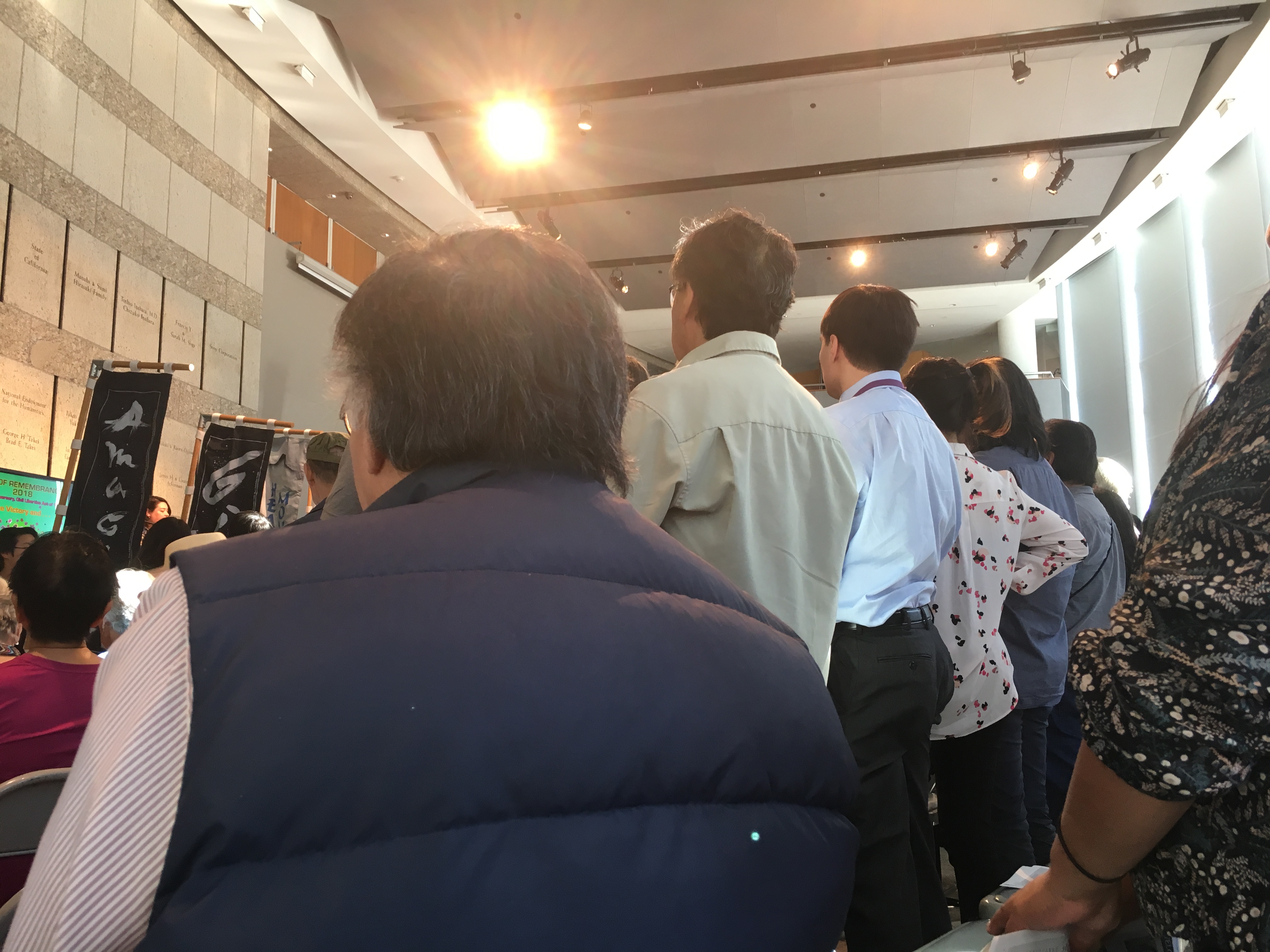 Among the many people that I met was Dean’s father-in-law, Yukio. 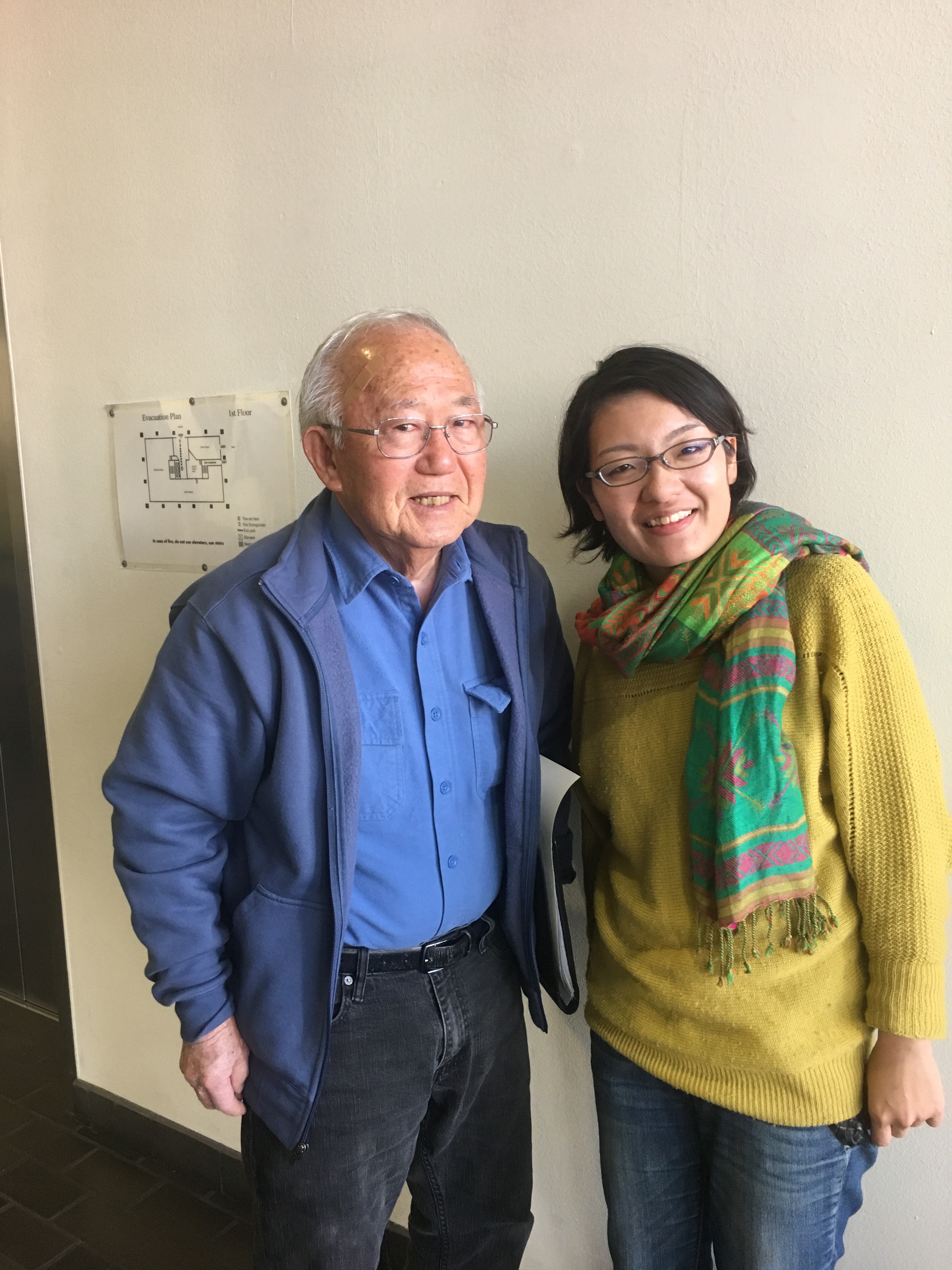 We promised to meet at a café sometime and within that same day I received an email from him. He sent an article that he had written and appeared in newspapers, about the various experiences he had at the Concentration camp called Tule Lake, when he was about 10 years old. For example, it talked about the fact that the Japanese had to fill out a statement that the United States War Department distributed. Question 27 asked if the Nisei were willing to serve on combat duty or in other ways, whenever ordered. Question 28 asked if individuals would swear unqualified allegiance to the United States and forswear any form of allegiance to the Emperor of Japan or any other foreign government, authority or organization. People were separated on the basis of their response of “yes” or “no” to these particular questions. In order to protect themselves, 90% of the adults gave a “yes” response. There were some people who resisted and did not respond as they said “It’s ridiculous to have to answer such questions.” And there were family members like in Yukio’s family that answered “no.” He also wrote that the family was sent to a jail-like place and even though the children were American citizens, they were treated as if they were enemies. He went on to write that in early 1945, when the war was still going on, the government announced the start of closing all Camps. Many were worried about where would they go, with no place to live, no jobs, and possible persecution by the white society.

After the war, the U.S. government did not enforce the deportation of the Japanese to Japan. Those who insisted on going back got on the ship bound to Japan. Yukio’s father was so angry with the ways of the United States that he took two of Yukio’s older brothers and got on the ship. Sadly, he passed away early in the midst of a life of poverty. Yukio was able to survive because two of his other brothers who came back from serving in the United States army convinced their mother by saying “In order for the younger children to not go hungry, you must not go to Japan.”

He says that even now, when he tells people he was in Tule Lake, there are times when people react because he was sent to the camp for the people who answered “no, no” on that statement. The people who have been tossed about in the times, made various choices and had separate destinies, their children and grandchildren who have “Japan” as their common roots to rely on, re-create their community. It need not be said, that this is very different in nature from the local communities in Japan.

Yukio is 87 years old. He was involved in the city planning of Downtown Los Angeles. He showed me a recent map of Little Tokyo that he handmade, and says he plans to put in the copyright notation and sell it to newspaper publishing companies and ad agencies.
As he says that “People now-a-days have smartphones and don’t use maps anymore,” it seems that he is thinking that by producing maps that reflect the always changing town in a visible manner, he can spread awareness of Little Tokyo that will support the community. On the back of the map, he wants to print the handout brochure for the Little Tokyo Historical Society of which he is a member. Other Little Tokyo organizations and businesses will also have the opportunity to use the map in front and in back put in their own information. The goal is the wide-spread use and distribution of the map, including in newspapers, to encourage all people to come and enjoy Little Tokyo. It is two-dimensional but indeed this planner’s idea is three dimensional. Yukio is also a writer. He gave me a copy of his poem “Short Love” about a short man having trouble finding his love among tall women, but finally finding a women who is the same height as him. It was a one time poem written for Valentines Day. 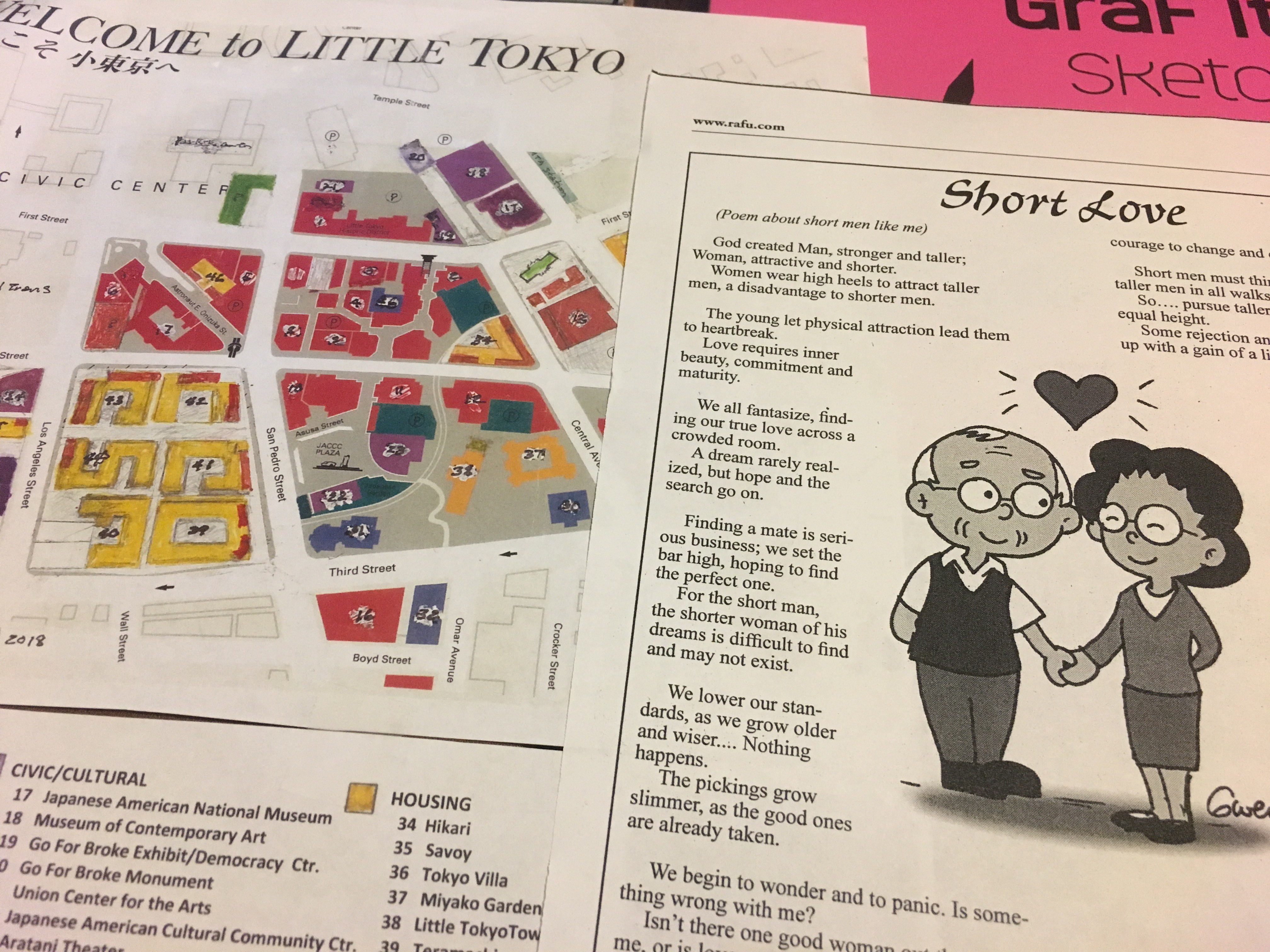 I asked Yukio “Are there many people here who have experienced life in camp?” and he said “They have passed away, so there are not many left.”