As for where I am staying now, 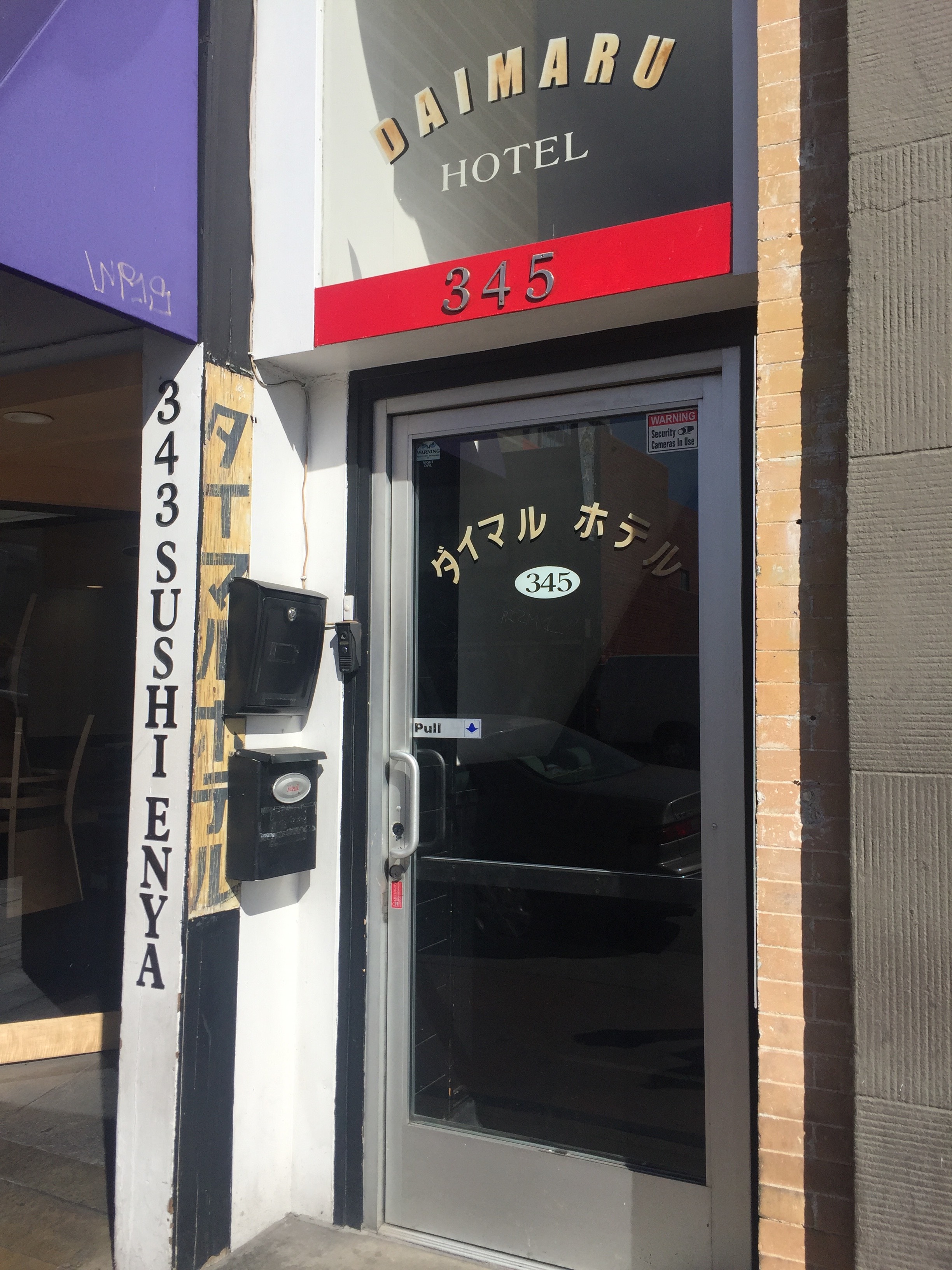 This is it. I really like it.
As you walk in, there are clocks showing the time difference between Tokyo and Little Tokyo. They come in handy. 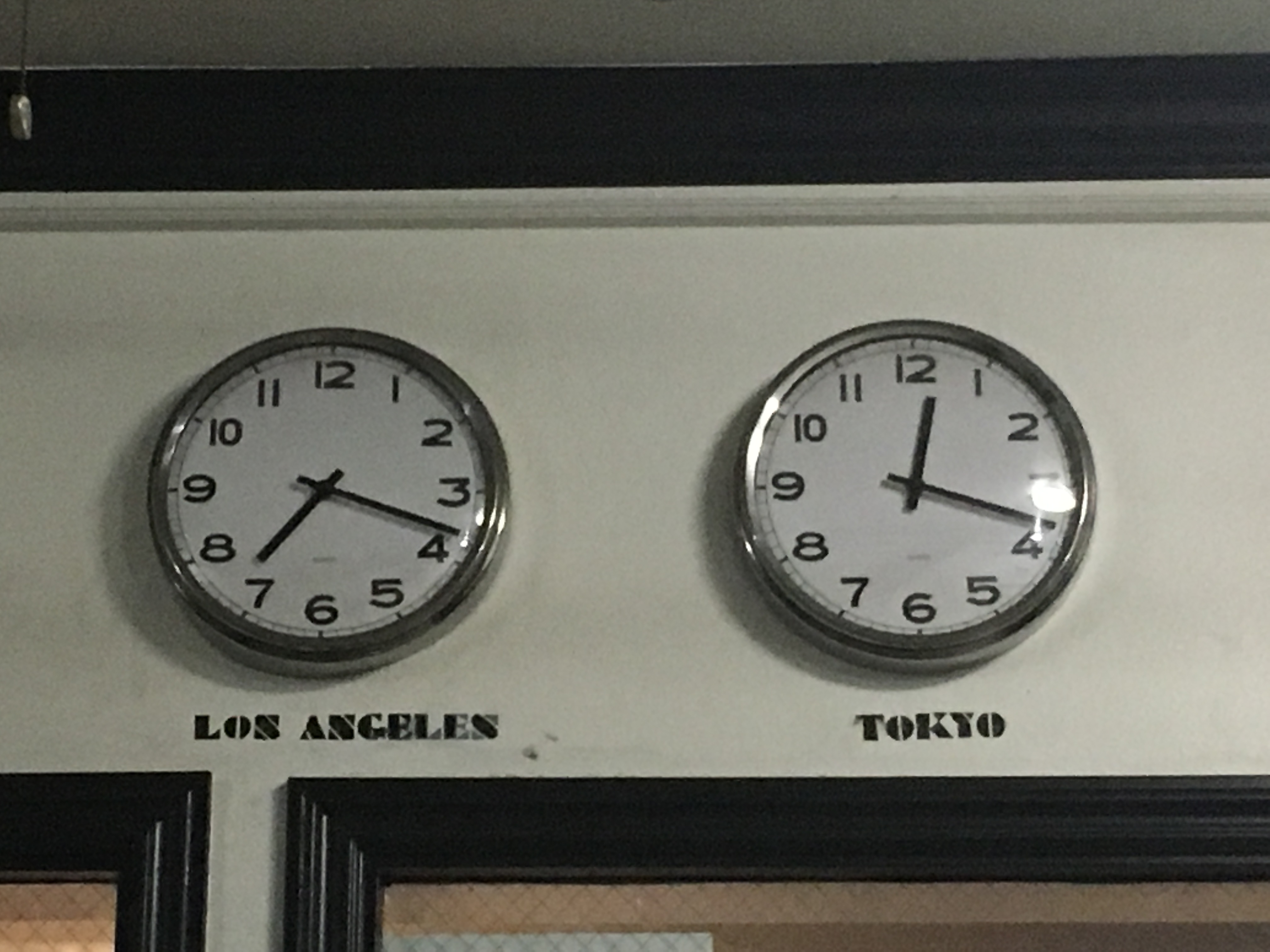 At 10:00 this morning, I went to the Little Tokyo Service Center (LTSC) office to meet with Executive Director, Dean Matsubayashi. As I walked in the room, the first thing he did was welcome me with donuts on the table. I chose a coconut donut. Dean brought out a lot of reference material, as he told me about the principles and objectives of LTSC’s, what they place importance on, and what kind of activities they have put on, in an easygoing manner. After we talked for a while, he asked me, “Now, what can I help with?” I had a lot that I wanted to ask him, so I bombarded him with more questions.

We talked about what I talked to Grant about yesterday, about the reason why people value the town of Little Tokyo so much. He said that there is actually a large population of Nikkei, Americans of Japanese descent, living all over the Los Angeles area. Outside of that area, there are also a widespread of Nikkei communities that exist in all over Southern California. Looking at Dean’s map, downtown Little Tokyo, where I am presently staying, is a small area compared to the areas of Chinatown, Korea Town, Thai Town, and Historic Filipino Town. I have also heard that there are many Latin American and African communities co-existing as well, but it is clear that Little Tokyo looks small.

What is important though is that this is the first town that the Nikkei pioneers started up in Los Angeles, and it is a place to come home to, even for those who drifted away for various reasons. It is also more the reason for it to be a place to protect its historical and cultural values, healthy living of the community and to provide social services for those in need. In order for me to better understand, Dean gave me some examples of what they do, such as caring for the poor and victims of domestic violence, supporting those requiring long-term care and their families, and helping small businesses. In particular, LTSC offers social services to the Japanese who need English language assistance. Their work toward building housing for the elderly in this area, is also an important function. I got a chance to see catalogs that showed the splendid exterior of the apartment buildings that have been built so far. And indeed from this month, construction of a Budokan begins. It will be a large Budokan, including two basketball courts and an outdoor stage to hold concerts. Dean looked at the drawing of the new facility as he talked about it enthusiastically.

This is where I asked the question that I wanted to ask a specialist on communities most about. “Now, what about art? What are your thoughts on the effect of having various artists in this town?” From his standpoint and perspective he answered, “Various activities promote the vitality of all and empathy.” There was something else I wanted to find out about, so I said, “As you asked me what you can help me with, I would also like to know what I can do here. I am trying to think about my mission, and that’s why I’m asking.” Immediately, we started to talk about the title of my short proposal, “Plan for Compiling the Words of the Elderly,” and I found out that he was interested in it. He said it was powerful and continued by saying, “This country is really in danger now. There are people who support actions that could start a war, but that is because they don’t know what war really is.”

Dean gave me the feeling that I could grasp something inside of the fog. And it was clear that I was blessed with a really good collaborator. I’m glad I met him on my second day here! There are still many things that I don’t know about, but I may find out more as I go along.
I reported to him that I started writing my blog, that there are too many things to translate so I don’t think I’ll get that done while I’m here, but that I will be sure to do it when I get back to Japan, and a couple of concrete plans of action that I am thinking about taking. (He was happy to hear about them.) At the end, I asked if there was a small space available for a possible exhibit. The answer was “Yes.”

After a very meaningful meeting of an hour and a half, I had another fun lunch meeting. This was with Leslie and Scott of the Japanese American Cultural and Community Center (JACCC), partners with LTSC. They recommended many art scenes! There are so many, I don’t know where to start from.

Tomorrow is Saturday. I will take a break from blogging on the weekends, and instead walk around town looking for something interesting.